At the beginning of 2014 I actually found out, that Mercedes produced a Pick-Up themselves in the 70s. At first I thought "well that looks weird", but the thing grew on me.

It was only available as a 220D, i. e. an amazing 60 hp out of a 4-cylindre Diesel motor. All cars had the front bench for three people and a 4-speed column shift.

So having already two old Mercs, the idea came into my mind to have one of those cars. I researched the Internet and found a couple of cars online.

As my wife grew up in Argentina, we had friends visiting on 4 August 2014. I printed out a picture of the Pick-Up and asked my friend Carlos if he knew those cars. His answer was "of course". So I asked him, if he could get me one of them.

As we would find out during the next two years, his answer was probably the worst, most far-reaching statement he ever did:

"I GET YOU ONE OF THOSE CARS"

How this continues, why it got really difficult - even for someone who is in the car business in Argentina for a long time -, and why I still haven't touched the car to this date ... read more next week! 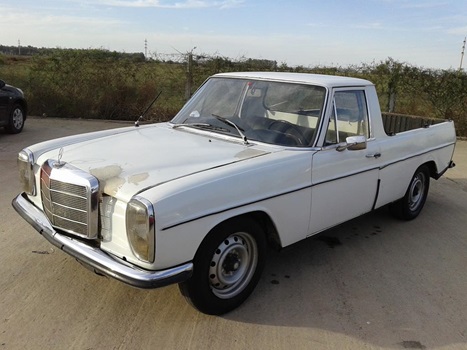 So after the magic words "I get you one of those cars" I started searching the internet. Not a lot of cars are actually still available. On top of that we found out, that most of the cars online do not exist anymore.

At that stage the project was actually extended to two cars. A German Mercedes Club, where I am a member, was interested to get a station wagon for their collection. This had the advantage of sharing the shipping costs to Germany, as they are significantly higher than e. g. from the USA.

So after a lot of phone calls around Argentina, we found the station wagon in Cordoba (around 1,000 kms away from Buenos Aires) and the Pick-Up ... another 200 kms away.

The "Rural" Station Wagon after the purchase ...

So with the help of Carlos' friend Xavier (and a lot of work) we actually bought two cars ... in May 2015. Those two photos are the first photos of the cars at Xavier's place. Happiness exploded!!!

So it was the end of May 2015 and I expected the cars in Germany around August. Therefore I looked for a donor car (more details later) and I talked to some companies about actually working on the Pick-Up from August 2015 on. Well it didn't happen and my credibility regarding schedules went down the drain.

What I plan with the Pick-Up and how it will be restored - once it's here - you will read next week.

Chapter 3: Donor Car for the Project

Well, 60hp from a Diesel is not exactly what I like. So the car had to be "upgraded".

So I was lucky and got into contact with a dealer who imported back a car from Japan. He intended to restore it, but when it arrived here it had a badly repaired front accident. So we made a deal: He dismantled all parts I don't need for the conversion, e. g. front and rear lights, bumpers, hood, doors, dashboard, etc. ... and I get the rest!

In June 2015 I could buy the car and as you see on the photo, that's the way it looks now. You can still drive it, but all the parts to be sold are removed.

The SL fits - more or less - into the pick-up, it has some nice wheels (so no extra cost) and a pretty good stainless steel exhaust system (no extra cost either). It ran around 125,000 kms and the motor seems to be in a good condition.

As the car has seat heating and electric windows ... more ideas for the pickup. The car I bought 1.5 years ago and it still is at the dealer ... waiting for the pickup!!!

How we spent the rest of the year 2015 on this project I will tell you in the new year, as I have better things to do in xmas time, than writing this blog ;-)))

Fight with bureaucracy (I) ...

So after buying the cars we tried to export them. Should be easy, fill out some forms, pay some money and off they are in a container ... well it was not.

First we found out, that we need a company with an export license for cars. Tried that for months, thought we had a company, but to cut a long story short: they led us down, cost money and towards the end of 2015 there was no end in sight.

We also found out, that the money for the cars had to be transferred to Argentina via an official bank in hard currency, i. e. USD or EUR.

Additionally we had to deregister the cars to have official papers of the cars ... otherwise no export. This had to be done with the previous owners, so another two months lost.

In October/November 2015 we thought we had all papers done ... but the company had done nothing at all. On top of that, national elections were held in December 2015, so no official was doing anything to move things forward.

A parallel activity with two German import companies also didn't work out, so in December 2015 we put all our hopes onto the new year, with the new government in place.

How this worked out and why we spent another twelve months on the export process ... have a look next week!

That's the original brochure of the "Doble Cabina", i. e. the four-door Pickup

Chapter 5: Struggling another full year to get the cars exported I (2016)

In the beginning of 2016 Carlos found an old friend again who he worked with in the 90s to import Rover / Land Rovers. After the government change in December 2015, he helped to find out what was necessary.

First Carlos' company needed an export license for cars. It was not possible to export the cars as a private person. With governmental staff leaving and new people on board this whole process took the first three months of the year.

A rear view of "my" Pick-Up

Well they weren't ... why? The customs authorities finally got the idea, that it has to be proven that my friend's company has "legally" aquired the cars.

Well as a German I thought "just put a new address on the invoice" ... but not in Argentina. We had to track down the previous owners and sign the contract ... but not just sign ... noooooo ... we all go to the notary and sign it there. You can imagine, how happy they were.

A notary confirmed signature of the previous owners on the purchase contract!!!

I was close to cancel the project at all. Here's some original text from my friend's email on 28 June 2016:

Hi Thomas,
Anyway, xxxx finish with all the papers with the last owners of cars after a very hard work because one of them was very difficult to convince to sign again, but at the end we got it.
Now with those papers in hands of custom agent we expect to put the cars into the ship asap.
I'll keep you informed...

How this continued in the second half of 2016 I will write next week ...

Chapter 6: Struggling another full year to get the cars exported II (2016)

So I thought after those signatures it'll go ahead. In August we got the information, that customs is happy with all papers produced so far. However we got an A4 sheet of fees, costs etc. to be paid.

But it took until mid-September 2016 until I received the official export invoice. Why? The bank (!) discussed more than 4 weeks (!) how the format of the invoice should look like (again no joke). So on 15 September 2016 I transferred the money to Argentina in hard currency.

Next step should have been the transport of the cars from Cordoba to Buenos Aires (around 1,000 kms). This should happen as late as possible (we're experienced with "late" now) due to the fees at the port.

But the custom authorities were creative and asked for more papers. Now they wanted to know the weight, size, power of engine etc.

Quote: We are doing our best but we live in Argentina. You must calm your anxiety. Things here are completely different like in Germany. We keep you informed once we can finish the nightmare...

Dog inspection at the port of Buenos Aires ...

At the beginning of November the cars were finally shipped to Buenos Aires. There we had to wait for the "dog inspection", which cost the small fee of 3,000 USD (!). They did that (ok), put the cars into the container, sealed it and .... and .... and .... the next department (x-ray scanner) said "no, there's a problem, do it again". This was of course to raise more money. So another dog inspection and at the end of November we got the "clear".

The cars actually were loaded onto a ship and this ship left the harbour on 6 December 2016, due to arrive in Bremerhaven on 4 January 2017.

P. S.: The port guys even had the idea to declare the cars as "loose goods", i. e. like cartons in a container. This would have added another 600 USD to the bill. The assistant of my friend exploded on the phone to them and told them "to throw the cars into the harbour as the cost now significantly exceeds the value". Then they backed off, scared of not receiving any money ;-)

The cost for fees, export, transport, container and import added up to nearly double the price of the two cars (!).

Pick-Up finally in the container ...

Well the ship was on time ;-) ... it arrived on 5 January 2017 in Bremerhaven and customs cleared it in two days (!). After a week the car was transported from Bremerhaven to me ... so I was pretty excited!!!

First the blxxxdy thing didn't start; there was no frost protection filled into the cooler in Argentina, so when standing around at -10 degrees in Bremerhaven the block of the motor cracked ...

So we pushed it into the workshop and put it on the lift. And what we saw there turned out to be a ...

Pick-Up loaded off the truck ...

That the car is not in perfect condition was expected. But this was a desaster. The car had had a bad front accident, so the front part was shifted to the right. The sill bar had been bended and basically all structural parts were severely rusted.

Since then I tried to get the "metal-parts-puzzle" together, i. e. sourcing as many original body parts as possible. Some are still available at Mercedes (!), I get some from the club and other online sources are helpful as well.

So next step is an inspection of the car by a panel beater and to get a price for - basically - completely rebuilding the whole body.

Even the seatbelt is held by a knot ;-)